Imagine a manufacturing business without a sales department. Nonsense? Yet, many producers in developing countries turn out commodities for export without being able to sell them to overseas customers.

Or, imagine a banking industry that allows foreigners to control a profitable corporate financing business in its home market. Impossible? Not in supply chain finance that is dominated by a few dozen players from OECD countries.

The modern structure of commodity exports from developing countries has been shaped by the legacies of the past. It is characterized by the decoupling of a sales function from production, as shown below. Except for a handful of (usually state-backed) national champions, few exporters are able to sell their production in foreign markets. More often, international sales are carried out by trading houses backed by international banks. The higher their bargaining power, the lower profit margins are left for commodity producers: 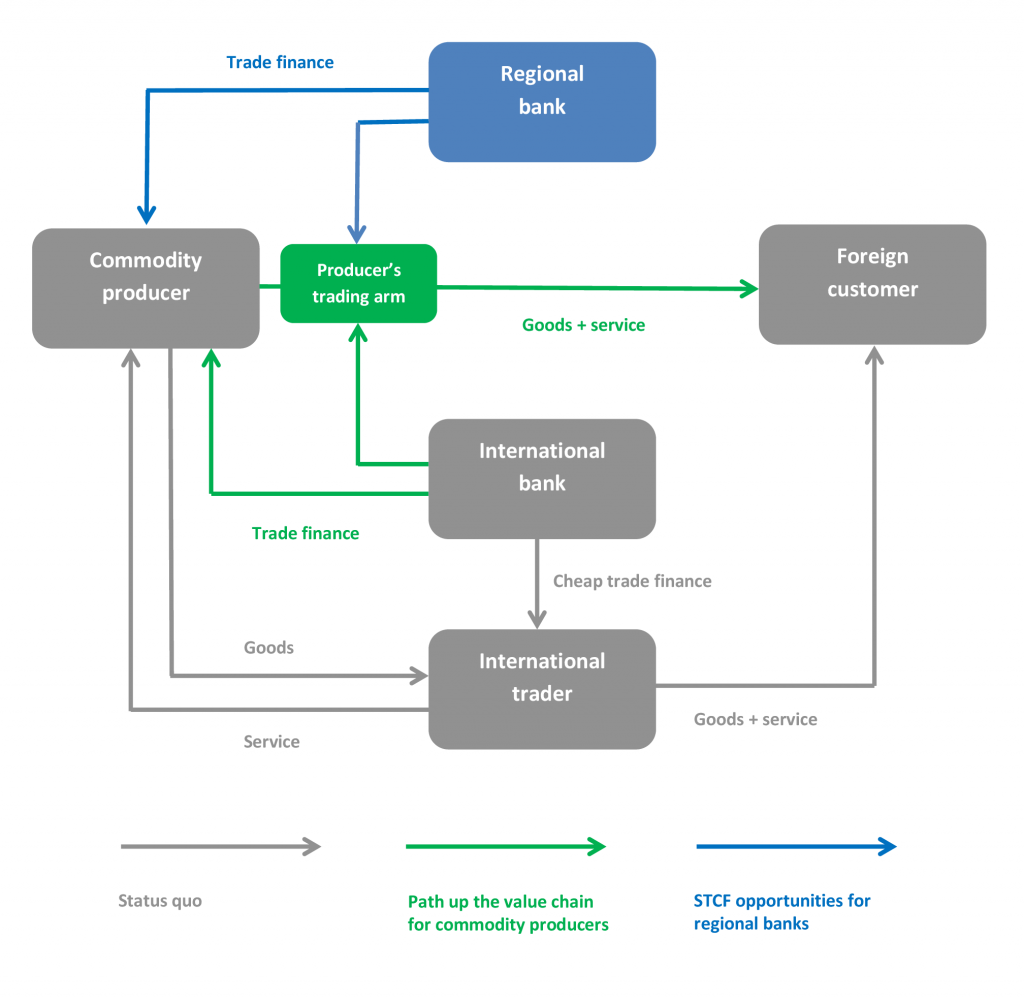 In this article, we will look at forces that change the structure of the South-South and South-North trade and herald new opportunities and threats for commodity producers, traders, and financiers.

Except for wholesalers, distributors, processors, and other specialized service providers, physical commodities trading is a fairly simple business. Often, the entire shipment goes straight from one producer to one consumer . . . with several intermediaries in between. Let’s face it—despite all the hoopla of the past two decades about e-commerce and disintermediation, many trading companies are doing well. The biggest traders keep growing—organically, by purchasing smaller rivals, but increasingly through vertical integration. A dozen traders at the top have transformed into global commodities powerhouses, where “trading” will not reflect their main business before long. So what prevents producers and consumers from dealing with each other?

For one, it is the lack of producers’ customer service capabilities. The decades of competition between trading companies have educated international customers to demand auxiliary trade services as a matter of course. Nowadays, instead of purchasing raw materials, they shop for supply chain solutions that comprise commodities bundled with international logistics, financing, and risk management services. For example, it is not uncommon for large corporate customers to buy raw materials only on DDP terms, simply because they have no staff to run operational aspects of international business.

This brings about another reason—the lack of vision and understanding of international trade dynamics. Consumers welcome direct links with producers. The recently exposed vulnerabilities of global supply chains encourage the adoption of just-in-case procurement strategies. Nonetheless, the onus of building such relationships—and required customer service capabilities—is on producers.

Thanks to globalization, international trade services—especially logistics and financing—have gradually become commodities themselves. Traders worth their salt provides these, and many exporters may in-source them at a very reasonable cost.

The main element that makes up the trader’s added value is usually called “marketing services,” which is a popular misnomer that may lead to misconceptions about the trader’s role in the supply chain. Even though modern customers are an increasingly demanding lot, no marketing is involved in physical commodities trading. What consumers need are raw materials of the right quality, at the right cost, and bundled with certain trade services. Ceteris paribus, a producer meets all criteria to become a preferred supplier. Thus, “marketing services” are simply market intelligence—the ability to identify and profitably pursue the imbalances of global supply and demand.

In commodity exports, the trader’s added value is a combination of market intelligence and trade services. Traders rarely use such framing, as it implies taking advantage of market information that is not available to their counterparts. This is often the case, unless producers and consumers take time to build in-house market intelligence and reduce dependence on third parties’ trade services.

These considerations are important for commodity producers because they directly influence their bargaining power in commercial terms. A producer with no capacity to reach out to overseas customers is dependent on someone to bridge this gap. Operational dependence inevitably translates into low bargaining power and lower profitability of exports. By contrast, a producer with an in-house international sales department may not only bypass the providers of trade services—when required—but also independently develop and implement commercial strategies that maximize profitability of international sales. Operational independence helps shift commercial bargaining power back to producers, which is particularly important when supply chains become prone to conflicts of interest, as discussed below.

In the early 1990s, the collapse of the Soviet Union pushed Russian exporters of oil and metals to launch in-house trading operations from global trade hubs, as shown in Figure 1. These arrangements were put into place to minimize political risk and secure access to trade finance. Soon, producers realized other benefits:

·        Efficiency, which stemmed from retaining the intermediaries’ profit margins;

·        Profitability, which derived from implementing international sales strategies based on the producers’ best interests and primary market data; and

·        Security, which was brought about by customer base diversification and recourse to counterparties with stronger balance sheets.

The processes of globalization and market consolidation erode a “traditional” trading business model based on arbitrage and international trade services. In response, trading houses have been diversifying into mining, industrial farming, food processing, warehousing, transportation, financial services, and other value-added activities. Such vertical integration, however, creates fundamental conflicts of interest. One would not like to store or transport his merchandise in a warehouse or vessel owned by a competitor. A trader-turned-producer would undoubtedly prioritize sales of his captive production and use market information obtained from unrelated suppliers to further his commercial interests. After the recent string of corporate scandals, one cannot rely on the “Chinese walls” and other policies supposed to tackle the conflicts of interest. Finally, international banks may not tolerate the transformation of trading houses into quasi-banks for long, for obvious reasons.

In-sourcing of trade services by commodity producers is impossible without efficient trade finance solutions. Where will they come from?

A growing number of banks in emerging markets boast trade finance services, but closer observation reveals that many local operations are confined to documentary services—letters of credit, documentary collections, guarantees, and the like. For now, these may suffice to finance trade flows between developing countries, but large commodity consumers in middle-income countries already require trade services on a par with developed countries, and consumers in developing countries are likely to follow suit. Accordingly, demand for structured trade finance is set to grow across all commodity sectors and geographical areas.

Any local or regional bank taking trade finance seriously should be able to structure the following solutions:

·        Finance the client’s working capital against the pledge of presold and unsold inventories, back home and abroad;

·        Finance the client’s working capital against the pledge of export accounts receivable and future cash flows;

·        Finance the client’s logistics solutions, including marine and multimodal transportation and overseas distribution;

·        Facilitate price risk management through advice and assistance in the client’s hedging activities.

To provide these services, local banks must develop a good command of all aspects of international trade. Such expertise is only attainable through cross-functional teams embracing specialists in trading, shipping, risk management, and international law.

For large international banks, the emerging markets offer an obvious platform for growth. Direct financing of the producers’ trading operations improves profit margins and helps spread out risk, among other benefits. The financial crisis, however, has slowed and sometimes reversed a push in this direction. As trade finance has undeservedly fallen victim to recent restructurings and lending cuts, especially among European lenders, it will take some time before international banks regain the appetite to cater to emerging commodity producers.

As a man sows, so shall he reap

Any commodity producer looks for the efficiency, profitability, and security of exports only after more fundamental needs—such as capital, technology, and labour—are satisfied. Market fragmentation is another reason that makes international merchants indispensable for smaller producers. But when favourable economic conditions set in, they invariably unleash market consolidation and the producers’ development along the following lines:

These developments have very practical implications.

As any producer’s focus shifts from reproduction to profitable growth, he starts implementing sales strategies that maximize profitability of exports. Taking control of international sales helps boost profitability by several percent. In parallel, the in-sourcing of trade finance not only reduces the cost of short-term financing but also builds capacity to raise long-term financing with the leading banks. When annual exports reach $30–$50 million, the producer’s financial gains may exceed a seven-digit number, year after year.

For international banks, embracing commodity producers is the only way to stop trading houses from cannibalizing their business in emerging markets. For decades, high political risks and imperfect judicial systems made such financings impossible. Today, a growing number of emerging markets get whitelisted in these respects; besides, any exporter may be financed through a trading arm incorporated in a global trading center, such as Switzerland, Dubai, or Singapore, among others.

A combination of know-how, global reach, advanced IT systems, low funding costs in hard currencies, and the first-mover advantage create a strong platform from which to grow trade finance in any market. Once the international banks are back to business, they will only need to strike a right balance between profitability and resource allocation.

For regional banks, the surge of local demand offers a unique opportunity to diversify into commodity finance. The current economic environment lowers the cost of acquiring related skills and competencies, as a larger pool of talent becomes readily available. A later start helps learn from the others’ mistakes. Regional banks should analyze and build on their strengths, such as local knowledge and networks, lower cost base, tolerance of political risk, and ability to finance exporters in local currencies. As banks in developed countries become more regulated, local banking regulations may also constitute a serious competitive advantage.

The evolving structure of commodity exports makes demand for trade finance increasingly mobile. No longer does the lack of local supply restrict development of commodity producers; rather, it provides incentives to shop for financing solutions elsewhere. To succeed in such a competitive environment, any financier should monitor local market developments and respond to them quickly. 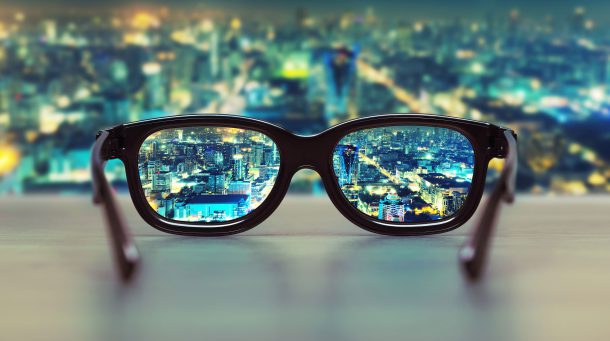